Woolworth lunch counter. Greensboro, North Carolina. Sixty years ago today four black NC A&T University students sat down at the white’s only lunch counter and spearheaded the civil rights movement in America. Image is of three of the Greensboro Four and the son of the fourth on the morning of the opening of the International Civil Rights Museum.

One year ago today, the International Civil Rights Museum in Greensboro, North Carolina opened its doors. Located in the old Woolworth building in downtown Greensboro, it is the site where four students from North Carolina A&T University began a historic sit-in at the lunch counter on Feb. 1, 1960 and helped ignite the Civil Rights Movement in this country. If you’re in town, plan a visit to the museum. 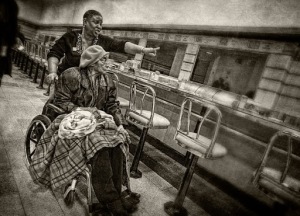 As I was watching the first groups tour the International Civil Rights Center and Museum in Greensboro last week, I noticed an elderly lady in a wheelchair being pushed along the counter of the old Woolworth building where the sit-ins began 50 years ago. The tour leader asked who she was and she told him she was Geneva Tisdale, a former Woolworth employee, who six months after the sit-ins began, was in a small group who were the first African-Americans to be served at the lunch counter. I had the opportunity to speak with her for a few moments. I first asked her if she remembered what day she was served. She shook her head and said she didn’t remember. I then asked her if she remembered what she ate. Suddenly the most incredible smile I have ever seen came over her face. She looked at me and said, “It was an egg salad sandwich.” 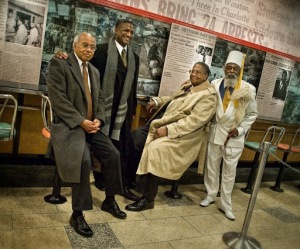 As I covered the opening of the International Civil Rights Center and Museum in Greensboro, North Carolina on Monday, I witnessed several memorable moments. The image that struck me the most was seeing the original Greensboro Four (three of the original group and the son of the fourth) at the original counter where they started their sit-in fifty years ago. From left to right: Joseph McNeil, David “Chip” Richmond Jr. (son of the late David Richmond), Frankin McCain and Jibreel Khazan (formerly Ezell Blair Jr.) Truly an amazing sight.

Greensboro is preparing itself this weekend for the long anticipated opening of the International Civil Rights Center & Museum. The museum will be located in the old Woolworth building on North Elm Street, site of a historic sit-in. Fifty years ago Monday, February 1st, four African-American students from North Carolina A&T University began a sit-in at the all white lunch counter at Woolworth which led to a change in the racial policy there and had a profound effect on the country’s Civil Rights movement. The museum will house the original lunch counter as well as exhibits on the Civil Rights movement from other places. Monday morning there will be the official ribbon cutting and opening of the museum, which will draw visitors and officials from around the country. I am proud to be covering this historical event.